The personalities of Wrestling Twitter banded together for some good ol’ fashioned competition in the form of wrestling stats. With it being almost impossible to follow all the action, here’s everything you need to know before the Finals.

PRELIMS: Expect the unexpected, anything goes.

This was a win by the largest margin. I had a feeling this was going to happen so I voted for the Ivy League as a nod to my Alma Mater. There’s definitely a better Ivy stat out there that I’m waiting for someone to pull up. 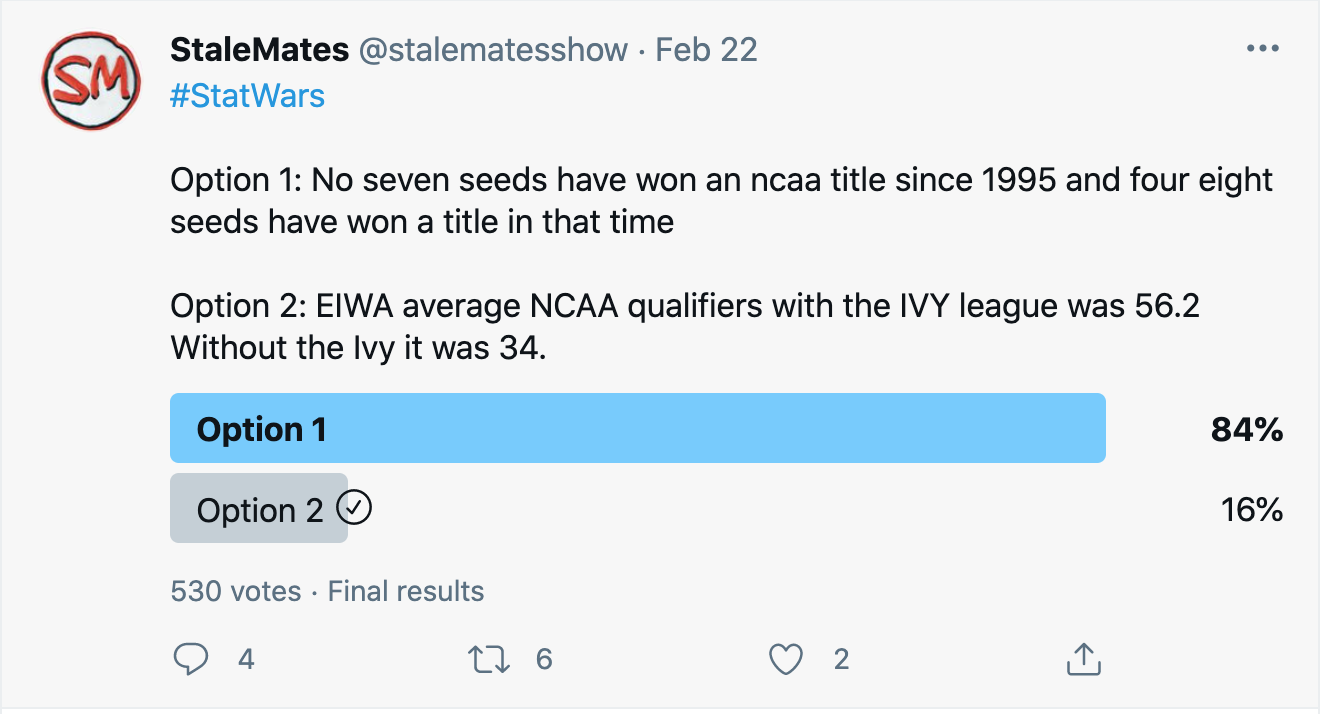 Loved the contrast with these two stats. One is providing commentary on how you don’t need to win a title to coach a team while the other is a straight meme. I feel like this would have worked better in the later rounds but I gotta give Option 2 credit for going for it 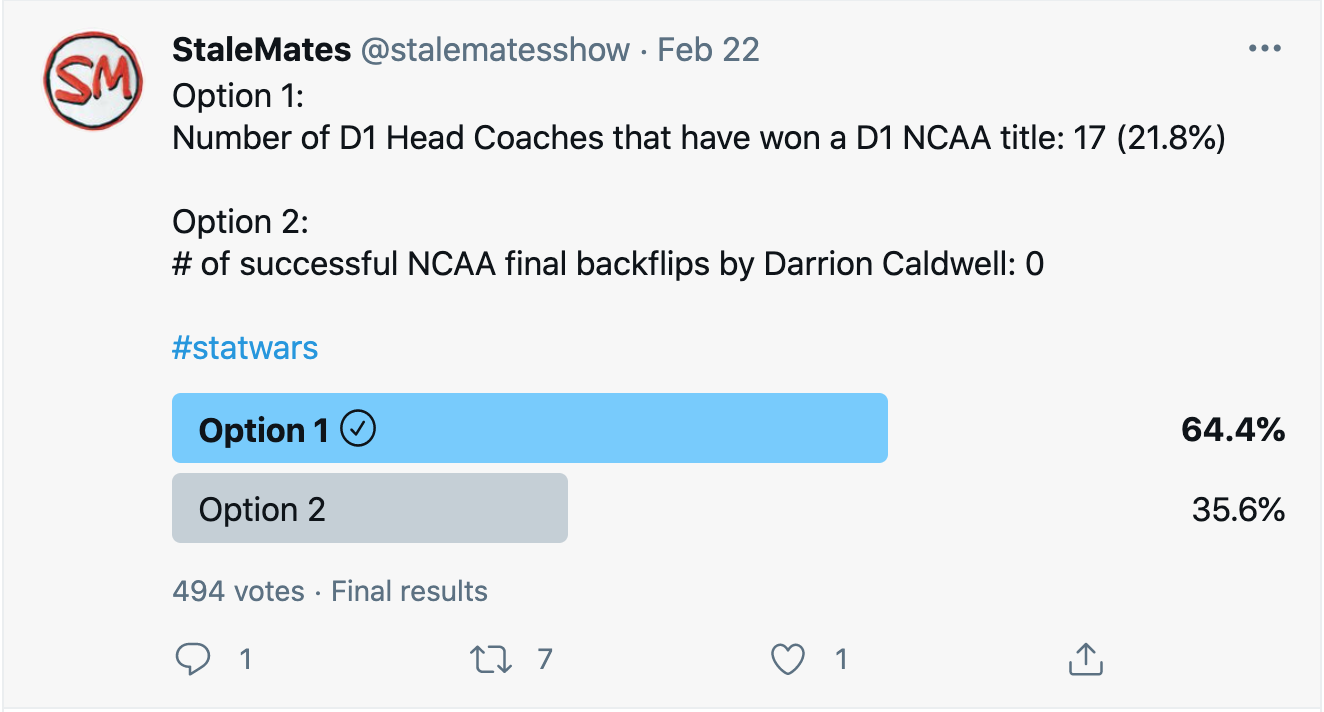 This was a battle between Bo and Freestyle Stans. Being the latter I had to go with the stat showing how important Cadet/Jr competition is. Also, Bo’s stat really tells me if he goes to his back he is statistically less likely to come from behind and win. Not really a good look tbh.

This was a great match up. Option 1 shows just how intense Adam Coon’s competition has been throughout his career, the guy has never had an easy opponent. Whereas option 2 covers the fabled “Marathon Match” between Fix and Suriano. If you were there for the match you had to pick this option, almost out of respect. I was not and suspect that is why I felt okay going with Adam Coon’s gauntlet of a career. 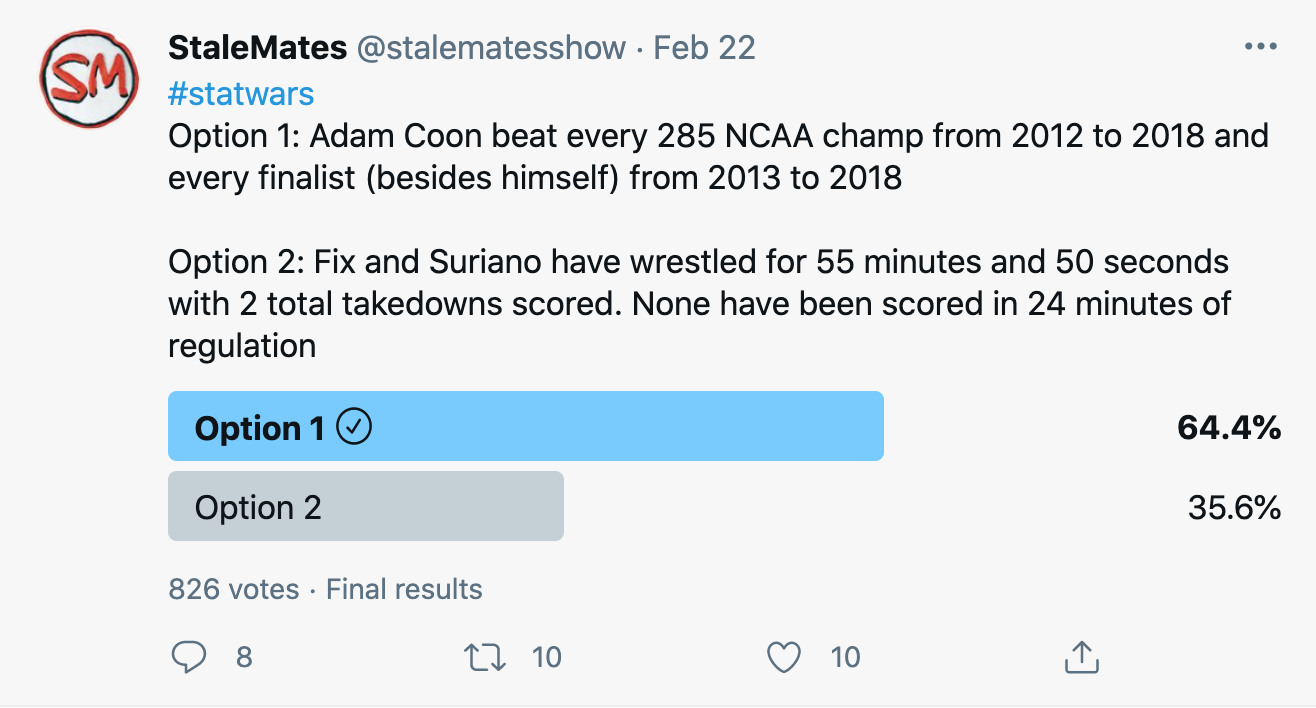 What I would give for the unbridled confidence to casually roll out the most known stat in wrestling. This person really thought they were gonna shock the world with this one. To make matters worse, it was paired up against a stat basically catering to PA wrestling Stans, the most volatile and aggressive conglomerate of the modern era. The results spoke for themselves and let everyone know to bring their A-game to Stat Wars. GGs option 2

This shows the importance of good old data collecting, analyzing 1,660 matches won most voters outright. A good stat confirming winning the first takedown is a must, something most of us already knew. What I DIDN’T know was Option 1, which covers tech falls in the D1 NCAA finals. I thought it was great to connect all of these already rare wins. I wonder if Mitch Clark is aware of this stat? I gave it my vote but sheer numbers prevailed for Option 2.

Here we go, it wouldn’t be the inaugural Stat Wars without some controversy. I originally thought this was over an oxford comma but, it later came out to be the specific wording of a stat that was contested. Considering how I wasn’t able to immediately know which stat was in question shows that it wasn’t an egregious error on Stalemates part. Overall I’d give this scandal a 4/10

Quarter Finals: This is when we separate the men from the boys.

It’s about time, I’ve been eagerly awaiting an MMA stat to come into the fray. Wrestling fans love a good reminder that we’ve been silently dominating the UFC for the past 30 years. Option 2 went the complete opposite direction with their stat. Reminding us that the NCAA is averaging above a 1.00 k/d for D1 programs. A little macabre for me and the fans as well.

Talk about a barn burner! I was fully clenched drinking my coffee waiting for the results to finally come in on this one. Option one caters to both PSU fans and Iowa haters with a stat about the most heated topic in wrestling, seeds. It’s essentially a stat about another stat and that redundancy is just what this is all about. Option two puts a stat behind the amazing story that is Metcalf winning the Hodge. It’s got a mixture of ridiculous numbers (894-1) along with the added kick of uniqueness. My theory is that Iowa fans rallied behind this one with their multiple burner accounts for the win.

You can really feel the heat from the quarter finals here. Option one was a stat I appreciated from an aesthetic viewpoint. Three sets of twins… how many people is that? We all know a set of twins that wrestle, so it’s nice to recognize the ones that did it best. I went for option two out of sheer respect to the grind. From a coaching perspective, I want to hammer this stat into my wrestlers mind because it’s showcasing just how many leg attacks you need to be taking if you want to score.

This last one invited so many questions. For option one, straight up how is that possible? I need to see these brackets and have it explained to me like a four year old. Also it’s so insanely hard to be a 4x All-American, imagine going 2-1 one year to barely make this achievement. STRESS! As for option two, it just makes me wonder what the hell are they doing at this particular high school? I imagine a team just obsessing over the rule book, constantly finding loopholes and forcing the NCAA to respond with rule changes. Interesting, but not good enough to medal. Sorry Willie!

We find ourselves in the Semis with Jagger vs Oldest & Greatest and Ben Swalla vs Richard Man. Fans everywhere were on the edge of their seats waiting for the stats to drop. We even had a few, “wrestlers clear the mats!” from fans. In all the excitement, one fatal error would be made… 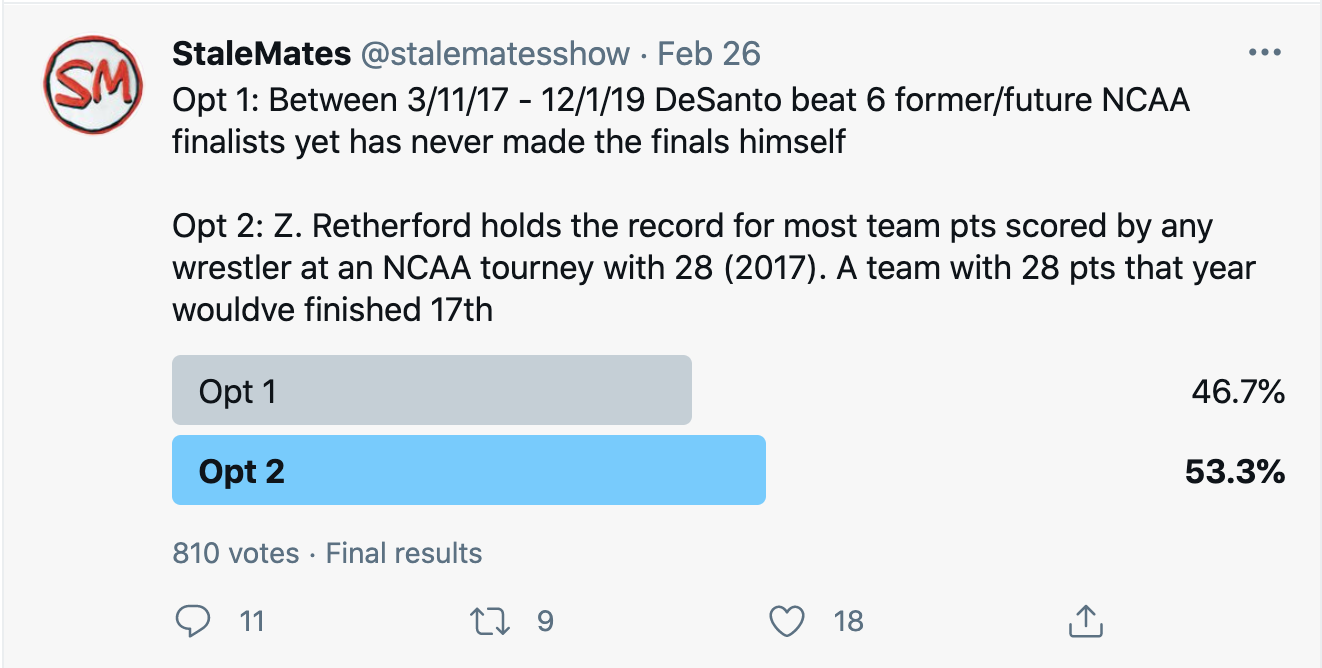 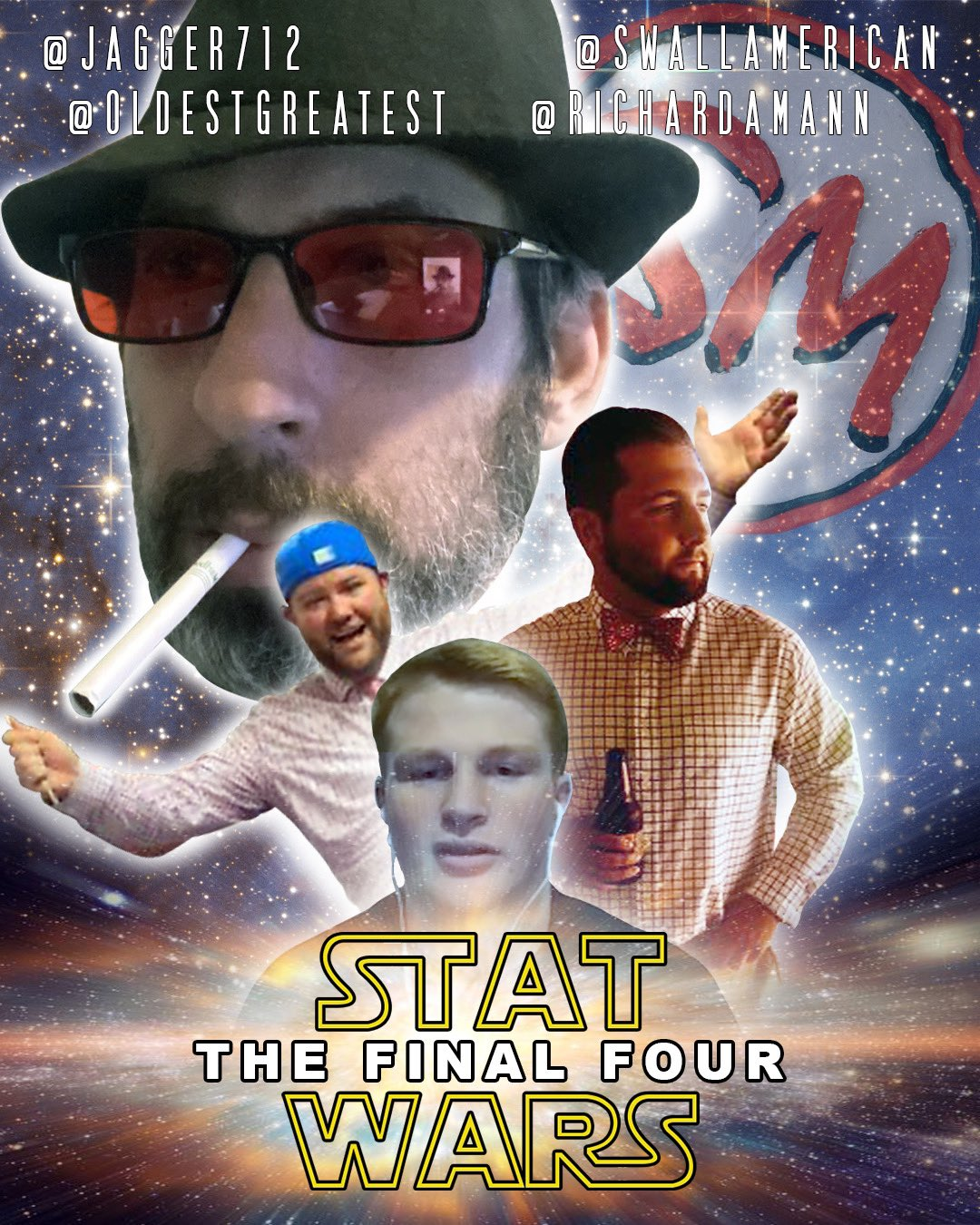 Behold, the infamous “Dirty Stat”. On the surface Option 2 looks like a harmless nod to Retherford’s dominance at the NCAA tournament. Underneath however is David Taylor politely reminding everyone he scored 30.5 team points in the 2012 NCAA’s.

Well actually it was this guy…

What resulted was some of the greatest displays of sportsmanship I’ve ever seen. We got another fire press release from Stalemate Zach. Followed by @OldestGreatest giving his own statement on the issue conceding to Jagger, who was too busy chain smoking packs of Marlboro to notice what even happened. All in all, a much better scandal than the first. 9/10 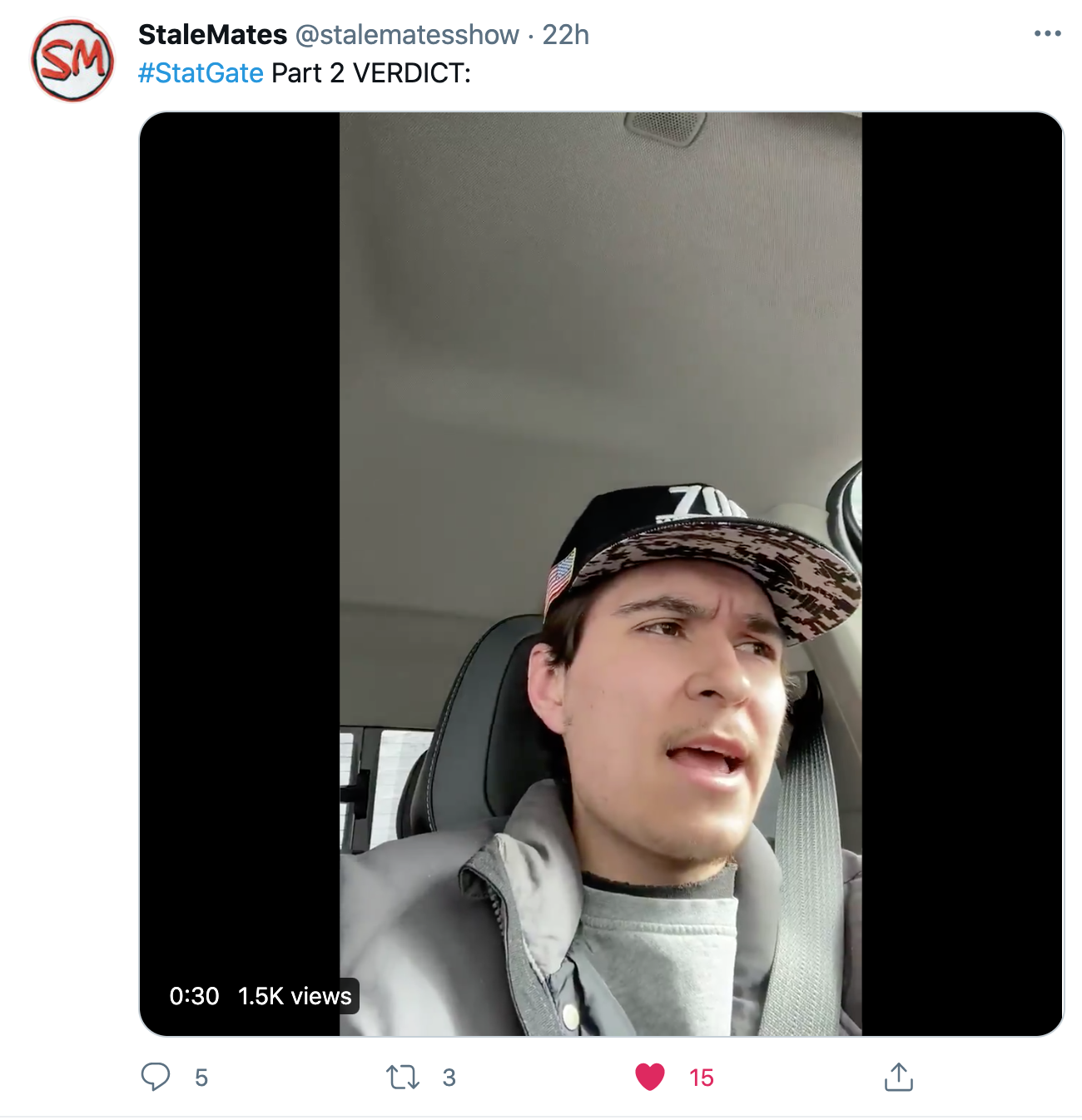 Fans were quickly reminded that there was still an entire matchup to decide who will try to take down Jagger. It was a close bout but in my opinion, option one got robbed. I’m all for highlighting how good Spencer Lee is on the mat but battling back to get bronze after a 1st round loss is something special. I fully believe that kind of experience fundamentally changes you. However, it wasn’t enough to overcome Spencer’s dominance on top.

The Finals stage is set and the hype is real. Who will be the inaugural Stalemates Stat Wars champion? Follow and vote to find out!

View all posts by stalematesshow